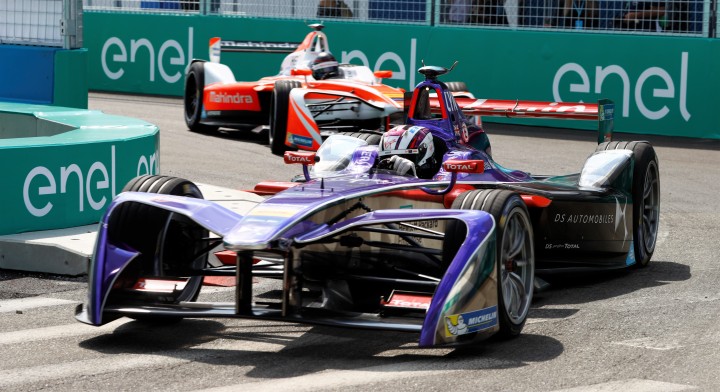 Can we just start off with me holding up my hands and saying ‘I get it’.

The noise isn’t quite soul-shattering, the speed might not be breath-taking and the lack of an actual engine is an unappealing factor for many, however Formula E continues to attract not only devoted fans and well-respected drivers, but major manufactures are flocking to the sport in outstanding numbers. Not bad when you consider that the championship is just about to wrap up its third season at a double-header in Montreal this weekend. Despite it’s success both on and off track, Formula E still hasn’t made it as a ‘fan favourite’ just yet. There is no denying that the sound and the battery have meant fans just can’t engage with the sport in the way they would like to but looking past those subjects, Formula E is one of motorsport’s strongest series. Yes, it is no IndyCar or Formula 1 but it isn’t trying to be.

With the news that Formula E would be welcoming current Formula 1 Constructors’ Champions Mercedes-Benz into the all-electric sport from season six, it was no surprise that the topic of Formula E was of high interest online last night; especially as Mercedes also announced they would be leaving DTM to focus on this new electrifying adventure. Although many fans on social media were excited to support the German manufacturers on this fresh challenge, an equal amount were vastly disappointed. In their eyes, Formula E had already snatched Audi from the World Endurance Championship and Le Mans where they displayed huge success, but now the electric championship was to help add a nail in the coffin of the German touring car series too. Nevertheless, should Formula E be facing this backlash, or should the finger be pointed back at these series and their inability to keep the manufacturers happy so as they don’t wonder off elsewhere.

Because although a Formula E car is powered by a battery that needs constant driver management, and that the result of being reliant on a battery means the neighbourhood might not know a street race is taking place just a few blocks away, Formula E is still a huge pull for constructors. Fact. Within the last two months alone it has been unveiled that there are over two million electric cars on our roads, a plethora of European countries are set to ban the sales of petrol and diesel cars just two decades from now and technology is developing at rapid speeds that mean the current issues we face with electric cars should soon be a thing of the past. The future of the automotive industry looks to be electric and Formula E are there to help inspire motorsport fans to embrace it.

After all isn’t motorsport as much about engineering and technology being at its peak, as it is drivers and constructors being at the forefront of change in their sport? Like most motorsport series in their early stages, there have been criticisms such as the need for a car change mid-race, something that is soon to be scrapped due to battery developments by the likes of McLaren Applied Technologies. The efficiency of engineering the sport aspires to is something that you will find in all top motorsport series, from Formula 1 to the World Rally Championship: the passion to make your machine as fast, efficient and systematic as it can be and to replicate or remodel it for your road cars.

As well as technology, Formula E is also pushing the boundaries when it comes to new locations. The perks of having quieter cars means that they can race around street circuits, often found to be a driver’s favourite type of track. Having the races in the heart of the biggest city centres also helps bring in a new audience for manufacturers and allows for high public engagement with new electric and hybrid road models. The fans are also becoming more involved in the sport, with Berlin proving special for one enthusiast who was handed the honours to present the podium finishers with their trophies before being doused in champagne.

The drivers enjoy the racing too. Speaking to one racer Antonio Felix da Costa of MS Amlin Andretti during the Paris ePrix weekend in May of this year, it was clear the respect the drivers have for one another: “that’s what is good about Formula E – we are all professionals. There are no senseless drivers out there and there is good racing as a result.”

So as manufacturers line up to secure a place in the all-electric championship governed by the FIA, it bodes the question, “how much bigger can the championship become?”

If in just three years since debuting around the streets of Beijing, the championship has returned Jaguar to racing, caused Audi to abandon Le Mans and WEC, BMW to become an official manufacturer from season five and now entice Mercedes Benz into the world of all-electric racing, what is next? More big names for the series? Porsche, Volvo and possibly even Ferrari?

Batteries will also get more powerful, lightweight and thinner all whilst aiding competition between the teams and drivers within the championship to be better than their rivals, which at the end of the day, isn’t that what motorsport is about? Technology, innovation and the desire to be the best.

One thought on “Is Formula E the most misunderstood motorsport?”